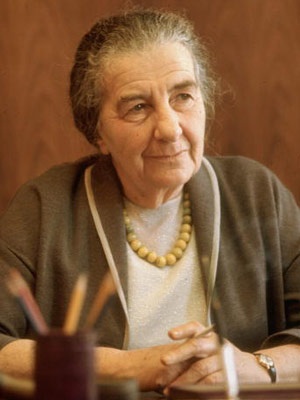 Why Newt Gingrich Is Right on Palestine -Benyamin Korn

﻿What do Golda Meir [pictured], lifelong socialist and prime minister of Israel, and Newt Gingrich, lifelong conservative and current presidential candidate, have in common? The courage to tell the truth about ”Palestine.”

Gingrich stirred up a hornet’s nest last week when he remarked that “The Palestinians are an invented people.” Golda made the same point when she told the London Sunday Times on June 15, 1969 that “There is no such thing as a Palestinian people.”

What could have possessed the Prime Minister of Israel and the former Speaker of the U.S. House of Representatives to say such a thing? Simple: an appreciation of history.

Gingrich has a Ph.D. in the subject. Golda lived it.
[The Algemeiner]

Palestinian identity goes back, not to antiquity, but precisely to 1920. No "Palestinian Arab people" existed at the start of 1920 but by December it took shape in a form recognizably similar to today's.

Until the late nineteenth century, residents living in the region between the Jordan River and the Mediterranean identified themselves primarily in terms of religion: Moslems felt far stronger bonds with remote co-religionists than with nearby Christians and Jews.

Then came the ideology of nationalism from Europe; its ideal of a government that embodies the spirit of its people was alien but appealing to Middle Easterners. How to apply this ideal, though? Who constitutes a nation and where must the boundaries be? These questions stimulated huge debates.

But no one suggested "Palestinians," and for good reason. Palestine, then a secular way of saying Eretz Yisra'el or Terra Sancta, embodied a purely Jewish and Christian concept, one utterly foreign to Moslems, even repugnant to them.

[T]he fact that this [Palestinian] identity is of such recent and expedient origins suggests that the Palestinian primacy is superficially rooted and that it could eventually come to an end, perhaps as quickly as it got started.
[Jewish World Review]

Was Gingrich right? Yes, of course, he is right.

There was no Palestinian Arab state or political entity under the Ottoman Empire or any previous ruler of this region. Indeed, prior to the 20th century, there is no evidence of there ever having been a consciousness on the part of the inhabitants of having a separate political identity that was distinct from the rest of the Arabs of the region.

It is a fallacy to claim, as some do, that Zionism is as much a modern invention as Palestinian identity.

The only people to call themselves "Palestinians" prior to the creation of the state of Israel were the Jews who were the first, and up until that time, the only group to conceive of the land as being the home of a separate people or national identity. That was no accident since the land now called Israel or Palestine was sacred only to one people. For centuries, it was an Arab backwater, but it has been the object of prayers for two millennia for the Jews who not only never ceased to hope for the restoration of their sovereignty but also, as is rarely mentioned, never entirely left its soil. Zionism was merely a new name for an ancient though still living people's belief about their homeland and their destiny.

By contrast, Palestinian nationalism is, as Gingrich rightly said, a 20th century invention. It arose and flourished purely as a reaction to Zionism, a factor that has fatally complicated the quest for peace as Palestinian identity seems to be predicated more on a desire to extinguish the Jewish state and to delegitimize the Jewish presence than it is on the re-creation of an Arab political culture that is specific to this locality.

That said, it must be conceded that even if the Palestinians did invent themselves in the last 100 years, it is pointless to deny they do exist now. Millions consider themselves to be part of a distinct Palestinian people with a common history and destiny. The United States and Israel both understand that their desire for self-rule must be accommodated so long as it does not infringe on the rights and security of Israel.

The catch is that the Palestinians seem unable to accept the idea of the legitimacy of a Jewish state no matter where its borders would be drawn. And that is where their "invented" history comes in. Since the Palestinians only arrived on the world stage as a result of their revulsion at the notion of Jewish sovereignty over any part of the country, it is difficult, if not impossible for them to come to terms with a peace that would imply Israel's permanence.

The role of the United States in this mess is not so much to point out the myths about Palestinian history, though myths they are, as to impress upon the Arabs and their supporters that they must abandon their rejection of Zionism.

As for Gingrich's judgment in saying what he did, it must be said it was refreshing to hear a major American political figure state the truth about the history of the Palestinians and to say the myths they have created have been in service to one goal only: the destruction of Israel. Doing so will not fuel anti-American terrorism as much as it will disabuse the Palestinians of the idea they have long cherished that sooner or later, the United States will abandon Israel.

Nevertheless, it must also be pointed out that if he is elected president, Gingrich will have to deal with the Palestinians and the Arab world. Being upfront about America's closeness with Israel and that there will be an end to Obama's practice of treating the Jewish state and those that desire its destruction as being morally equivalent is fine. But it remains to be seen whether Gingrich has the ability to be more than an accurate student of the history of the Middle East. It is fair to say as president, he will have to be more guarded in his statements and even fairer to express skepticism about his ability to do so.
[Jewish World Review]
*
Posted by Bruce at 6:37 AM

Arguments like this are very bad for Israel and the world. They do not help anyone and it is not like the Palestinians are going to say "So sorry, we are illegitimate. Goodbye." They have as much legitimacy as the current state of Israel--the UN resolution of 1947. Sure, Israel was once a Jewish nation in biblical times. And I guess then all the world belongs to Africa because they were the first people that spread across the face of the world. The American Indians own America. Mexicans and Hawaiians have some news for Newt about what they would like if he takes office. The world would be a very different place if everyone could make historical claims, or if living in an area was not enough if someone else lived there first. The Palestinians are part of the picture whether they really want peace or not. Newt showed he would be a very prejudiced and antagonistic Presidential choice. Israel's supporters may like it more than Obama's stance on Israel but just as Obama should worry about the Jewish opinion but cannot worry about it to the exclusion of all else, so too should Gingrich worry about the message he is sending and who he has chosen to send it to. This is a contentious issue that shouldn't be an issue at all. What is Newt hoping to prove? There was nothing to be gained but Newt pandering in the most blatant way for the Jewish vote. If simplifying the Mideast problem and ridiculing the Palestinians is all it takes to get the Jewish vote that does not reflect very well on the Jewish vote.

I thought for sure you'd like the Tobin piece as it ends quite critical of Newt:

"It is fair to say as president, he will have to be more guarded in his statements and even fairer to express skepticism about his ability to do so."

His was better not because he is critical of Newt (I can do that) but because he made the better point that regardless of the roots of the situation the reality is that the Palestinians are here now. There is a real people with a real issue though the issue never seems to be what they claim. I just do not think those comments by Newt or articles agreeing with him are helpful to anyone.

I fully agree that this truth may indeed be close to irrelevant...they are a people now. However, it is mighty refreshing to hear someone in such a high position state a basic truth that has been missing from MidEast dialogue. That Palestinian identity has its roots firmly in rejectionism, can never be repeated too often.