Making Palestinian victimization: blame the real victim for defending herself 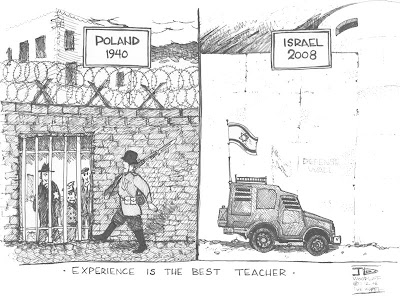 In the Emory Wheel [Emory University's student newspaper] of Nov. 14 there was a disturbing cartoon [pictured above] comparing the Nazi ghettoes with the separation fence the Israelis have erected on the West Bank. This equation is historically spurious and highly prejudicial. The Germans put Jews from throughout Europe in ghettoes to either die a slow death of starvation, deprivation and disease or a faster death with a bullet or poison gas.

Irrespective of what one thinks of the fence/wall (most of it is a fence), it was

not built for this purpose. It was built as a defensive mechanism. Even if one opposes it, one cannot ignore the fact that it has tremendously reduced bombings of Israeli targets. There was no fence/wall before there were these bombings of busses, schools and other civilian targets. It was built in response to them.

Whatever one thinks of Israeli policy, to describe it as akin to the Nazi policy of murdering all of European Jewry is to engage in anti-Semitism and a form of Holocaust denial.
(Emory Wheel)
Posted by Bruce at 7:24 AM

A disturbing story given that you would hope college students were better informed. This may reflect some bias in the classroom instruction also. They would all do well to put themselves in the place of Israelis and then maybe they could understand the not so subtle differences between what the Nazis did, and Israelis trying to protect themselves from people living amongst them and occasionally seizing an opportunity to kill as many innocent civilians as possible.

Yes, yes, disturbing indeed. The world seems to get quite uncomfortable with the notion of Jews defending themselves...they appear to like Jews better as victims.

I think it would seem more like defending if it followed the 1967 border and wasn't taking up way more land than it was supposed to.

I avidly studied Jewish history growing up, and only became "informed" when I began studying the Arab-Israeli conflict.

And how about doing well to put yourselves in the place of Palestinians?

If the situations were reversed and Israelis were behind the fence, you'd just say la-de-dah, all things are fair? No, you'd be bringing up the same comparison of what just happened sixty years ago. Or am I wrong?
Why is it okay for these people to be behind a wall, but not for you to be behind a wall? Even if the Nazis had just stopped with ghettoes, that would not have been okay in the slightest. But it should be okay with Palestinians because somehow they have lower levels of humanity and desires for their lives and their children?

When I went to Israel, I saw the way many Israelis treated and looked at Palestinians in Jerusalem. Israelis were clearly superior.

And, by the way, I can't help but love Israel despite itself, so don't try calling me anti-semitic. Suffering is suffering no matter what your religion, and I wish we could all be adults and see the humanity in both sides.

You'll never hear me say that Palestinians "have lower levels of humanity and desires."

But you will hear me say that they've brought about their own suffering by years of rejectionism. No terrorism = no wall. Period.

I appreciate you taking the time to comment here.

Please: don't be too quick to put the Palestinian Arabs into the victim box.

The MidEast is more complicated than the black and white frame you've placed around it.